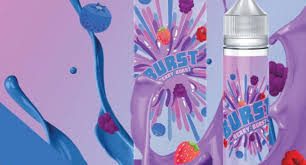 Are you a vaper who enjoys berries but just haven’t found the right e-juice that accurately captures the unique taste and aroma of berries? Allow me to introduce you to Berry Burst E-liquid. Berry Burst is arguably one of the best berry flavored e-liquids on the market. This US made premium e-juice utilizes a combination of different berries to create its pleasant fruity taste and flavor. Berry Burst contains an assorted blend of ripe Wild Berries, Blueberry, Strawberry, Blackberry, and Raspberry. Burst E-Liquids manufacturers of Berry Burst have made a name for themselves in the vaping industry by creating tasty e-liquids that feature a unique blend of fruit flavors. Berry Burst is one of the company’s newest e-liquid flavor’s to hit the shelves. Berry Burst will please vapers who enjoy berries and sweet tasting e-liquids. 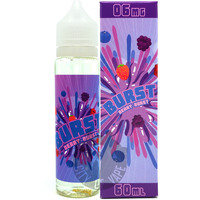 Besides the taste of berries, Berry Burst by Burst E-Liquids also has the taste of sweet candy. Both flavor’s blend quite well together to create a nice vaping experience. A combination of tastes and sensations hit you when you inhale Berry Burst. The taste on the inhale includes a blend of cranberry, strawberry, and raspberry. The inhale is very sweet; the flavor is more like a chewy candy. However, the sweet taste is not overly sweet. Berry Burst is a fine balance of sweet and fruity flavors. On the exhale, Berry Burst leaves you with a delicious taste filed with undertones of different flavors. These subtle flavors include some blackberry and raspberry. The overall after taste of this Berry Burst is pleasant.

Berry Burst by Burst E-Liquids contains both vegetable glycerin (VG) and propylene glycol (PG) at a ratio of 70/30. The high VG content in this e-liquid makes it thick and smooth. This e-juice also has a very sweet aroma. Berry Burst can be used on both a rebuild able atomizer (RDA) and a sub ohm tank.

Berry Burst like other Burst E-Liquid flavor’s is ideal for vapers who enjoy blowing out massive clouds of vapor. This e-juice produces quite a large amount of vapor with every puff. Besides creating large clouds, Berry Burst has a very smooth and easy throat hit. The throat hit of this e-juice is mellow; you can be sure there will not be any incidents of throat irritations. Berry Burst by Burst by E-Liquids come in different nicotine levels; 0mg, 3mg, and 6mg.

Berry Burst by Burst E-liquids is sold in 60ml Chubby Gorilla bottles. These plastic bottles which are ideal for their durability also come with nozzles caps. The packaging of this e-juice is quite impressive. The box comes with a purple eye catching design.

Berry Burst can be bought at Vape Shop Deals. This e-juice is normally sold for $27.99. However, vapers can buy Berry Burst by Burst E-Liquid for just $19.99 on vapeshop.deals. This site offers vapers interesting deals on several vaping products. As part of the ongoing discount, vapers can purchase e-liquids from several known manufacturers at a reduced price. These vape deals to buy cheap e-liquids can be cashed in by turning in some coupon codes. In order to get Berry Burst by Burst E-liquids at a discount, you can use this code VOLBRST on vapeshop.deals.