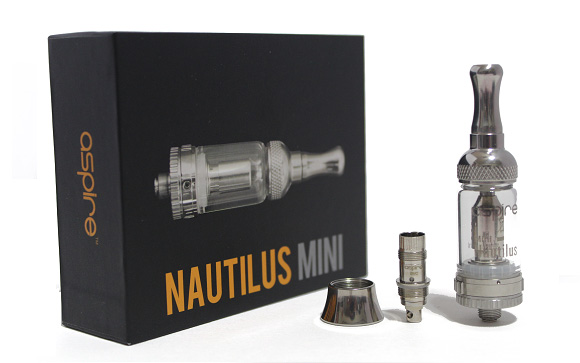 How can something so similar be so different? I don’t know really, but the Aspire Nautilus Mini tastes and vapes much better than its big brother!

I don’t really think it has anything to do with the tank itself, it’s all about the new BVC Coil. To prove it, I loaded one of my full-sized Aspire Nautilus tanks up with a brand new BVC coil and the flavor was instantly upgraded. Throw you BDC coils away and grab some BVC coils today. Don’t do that, but do order BVC coils where you run out of BDC coils. 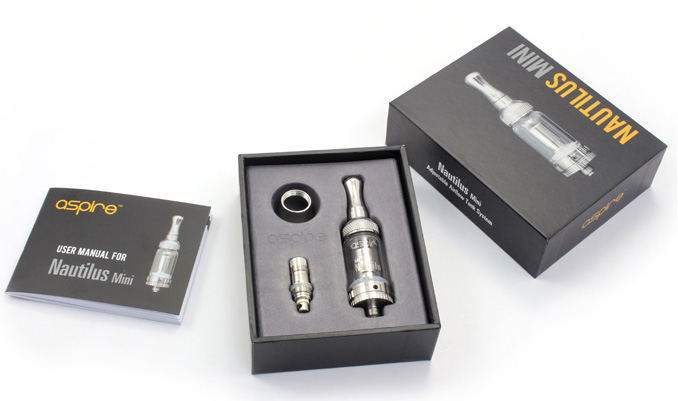 What’s in the Box?

What is the Aspire Nautilus Mini?

The Nautilus Mini is a new tank from Apsire that is the little brother to the original Aspire Nautilus. It’s made from stainless steel and the tank is Pyrex glass. The new BVC coil is a single vertical coil that is a big improvement in taste and vapor production from the dual bottom coils that shipped with the original Nautilus.

This new technology is designed to last longer while still giving users the purest and cleanest taste from e-liquids. The Nautilus Mini includes an improved four-port adjustable airflow system that is both user-friendly and reliable. This unique four-port system allows the user to adjust the draw, warmth of vapor, and amount of vapor produced. The Nautilus Mini design also makes it easy to carry, install, and refill. 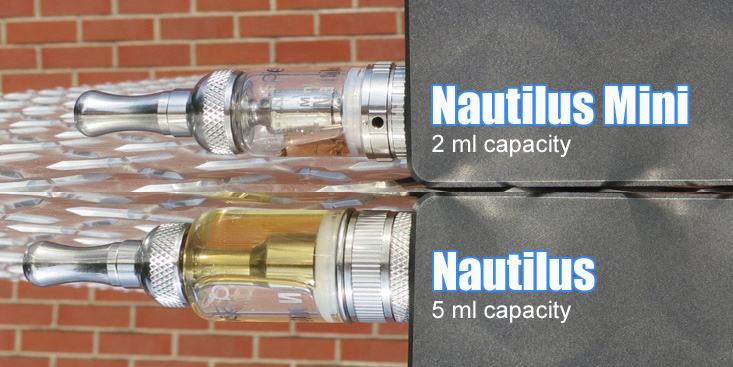 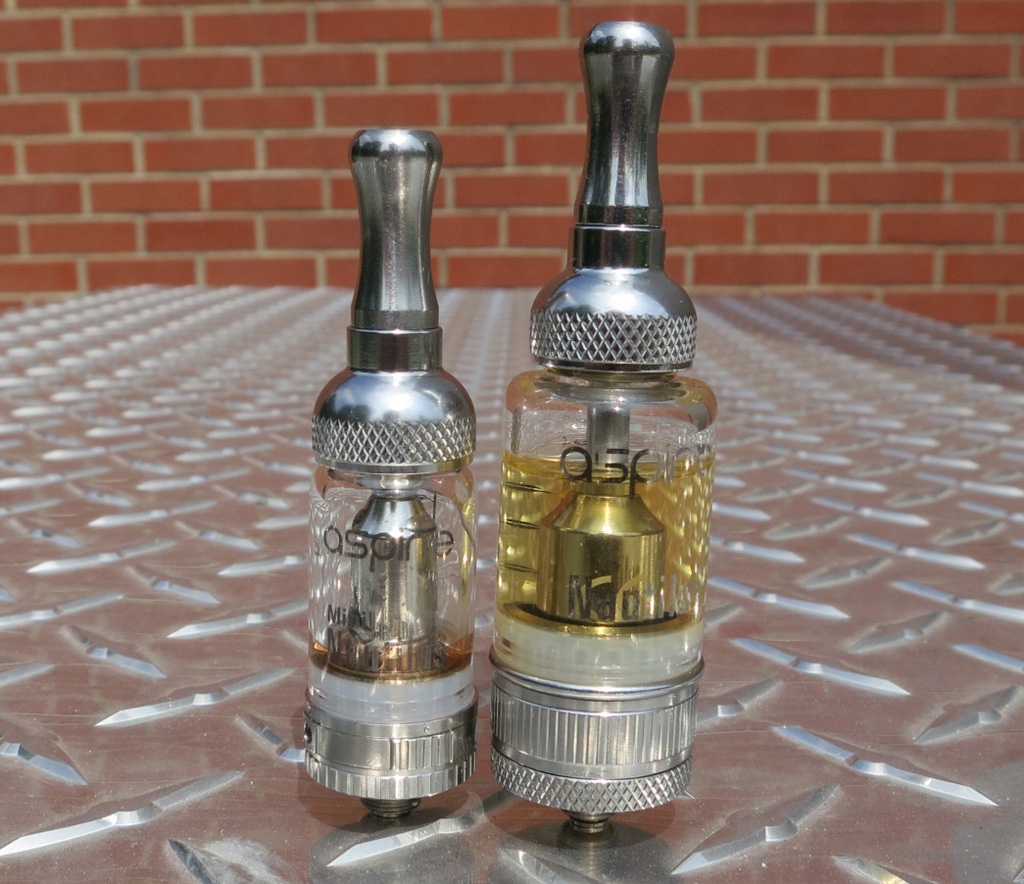 Here’s a size comparison between the original Nautilus and the Mini Nautilus.

The airflow control of the Nautilus Mini is also an improvement from the Nautilus. The hole sizes are the same, but to me, they feel less restrictive. On the 1.8mm (largest) setting, there is very little restriction. The ring locks into place better too. It’s a little tougher to move around, but that’s a good thing. 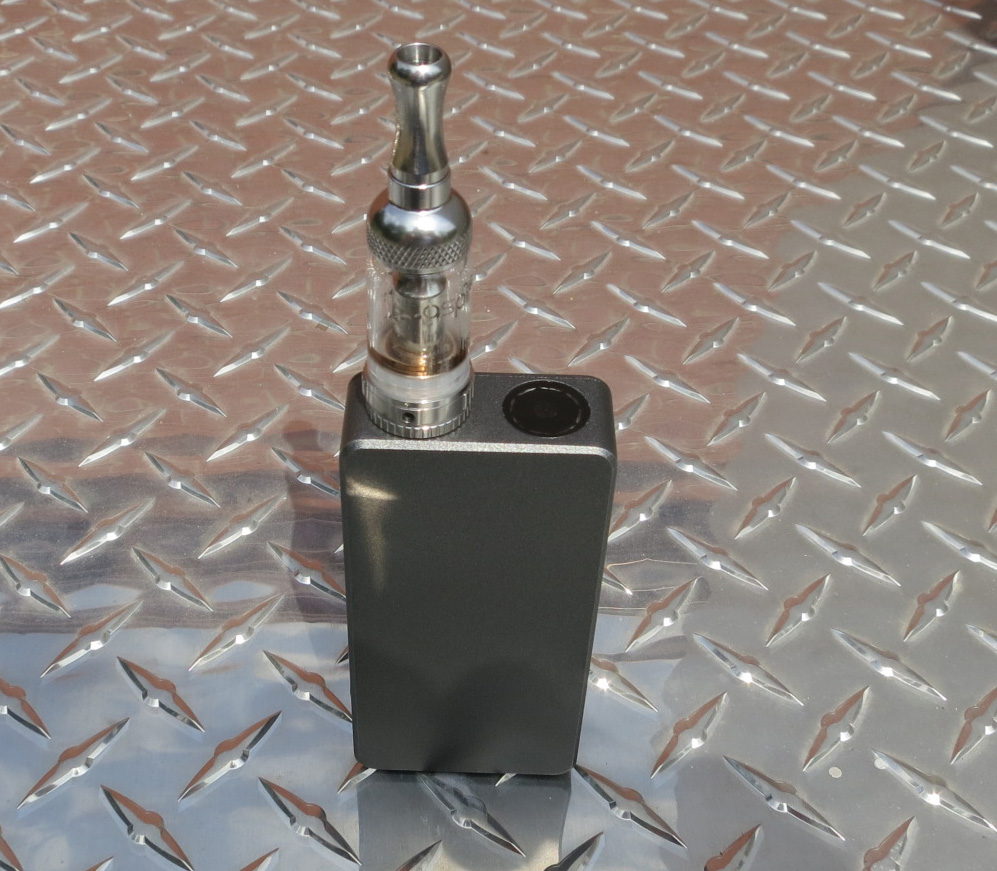 I said I have no idea how it works. I was stunned that a single coil could produce such an improved vape. Digging around online, I found that the internal workings of the BVC coil is much different from any other replaceable coil on the market as the wicking material is not actually inside the coil. The air flows directly through the coil with no obstructions. The wicking material around the coil instead of through the coil. I tried to dissect the coil and can confirm, even though I mangled the coil, there was no wicking material inside of it.

I really don’t care why it works, I can just tell you that it does… and well. I wouldn’t say that the flavor is better than my Fogger V4 or Kayfuns, but it’s closer to them than any other tank I have tried to date.

The build quality is quite nice, but I am not a fan of the threaded glass. I feel like this can become an issue with banging and drops. I have been pretty lucky with the regular Nautilus and have only had one drop, which led to a broken glass, but some people might not be as lucky. Luckily, Aspire sells replacement glass and metal tank replacements. The Nautilus Mini feels solid though.

The only issues with the tank that I’ve had is the same one I have with the 5ml Nautilus, the seal. The seal is really tough to break sometimes. I normally use pliers with a rubber cap on them to get mine started, but others say that putting it in the freeze a couple of minutes does wonders too.

I really do not like the looks of the Nautilus or the Mini for a couple of reasons. I think that Aspire should have imprinted their logo on the metal somewhere and not on the tank. It just takes away from the clean look. The other issue I have, is the big ugly silicone seal at the bottom. I understand why it’s there and like what it does, but I don’t have to like what it looks like. The rounded look doesn’t do it for me either, I much prefer the looks of the Aerotank line.

I’ve only been using it for a week, so I can’t speak to the claim of improved life for the coils. I have read from some that they’ve gone a couple of weeks without the coil performance degrading. I can not say how much better the taste is from the regular Nautilus and that amazes me since I was in love with the Nautilus until I met the Aerotanks.

I can chain vape without any dry hits. The wicking is crazy fast. I can also crank the watts up and not scorch the juice to the point were it tastes bad. I don’t see any reason to vape these much higher than 8-10 watts, but it can be done.

With great tanks comes great prices? This is true, but the Nautilus Mini is well worth the money. They are the same price as the Nautilus unless you catch them on sale somewhere.  ElementVape has them for $23.45 right now. I’ve seen prices around the $30-35 range in local vape shops. They are expensive, but well worth it.

The replacement coils, even though they are much better than the BVD coils, sell for the same price.

Basically, the Aspire Nautilus Mini is the best non-rebuildable tank on the market right now in my opinion… hands down. I personally won’t use mine much due to the small capacity, but I for anyone that can deal with a smaller size tank, I highly recommend the Nautilus Mini. I think it’s perfect for eGo or VV users.

You can get the Aspire Nautilus Mini from ElementVape for $23.49 right now.